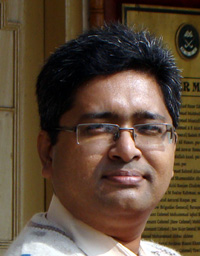 I was born in the capital city of Bangladesh- Dhaka. Passed my SSC and HSC from St. Gregory’s High School and Notredame College respectively with moderate results, which subsequently allowed me to graduate and post graduate from Business Administration from University of Dhaka.

During a Grad Student, I became one of the founder contributor of first generation dial-up based internet service provider known as “Asia Online & Networks”. It was fewest amongst earlier online narrowband based internet services to the capital city. I was leading the Technical Department of ISP Services.

During post-graduate and after, I joined Aziz Trade and Engineering Limited, as Head of Automation, between 2002-2005. During this period I successfully completed several turn-key projects; amongst to be mentioned of introducing prepaid metering and mechanism in domestic gas distribution system.

In the year 2004, founded a partnership entity called “Shah Enterprise” and worked as procuring & overseas managing director. The objective of forming such endeavor was to work as local vendor partner solution of GPS system, Night vision relay optics and mapping solution of international recognized product vendors such as Magellan, Thales, ILKO (Russian) and MapSend. In parallel, the entity also dealt in importing agro based equipment and indenting to local suppliers.

In the year 2005 and continuing, founded and acted as Chief Technical Officer (CTO) of “Ensii Global Networks”- a Telecom Value Added Service Company, Virtual Hosting Services and Software Development Project based company. During this time successfully contributed over 40 various software projects- most of which were start-up conceptual based services. Contributed enormously, on the field of VAS and Cloud based services. I have also worked with various defense authority and units in the country on different integration, supply and software projects. The company took Mobile PKI based payment and Ecommerce Applications and later Cloud hosting services. The company is listed in entities such as multiple Telecom Operators, World Bank Group, Swiss-Katalyst and various Defense authorities.

For a short tenure during 2007-08, worked as project coordinator of a USA (Texas) based joint venture offshore opportunity called “Network Elites and Opus Onetech”. Several Software Development projects were undertaken in the short period amongst one of the project was delivered to one of the then fortune-500 listed company in the US.

In late 2011, joined Mango Teleservices Limited as Head of Technical Solution (Currently as General Manager). Mango is a Bangladeshi owned mid-sized transit telecom operator; This eventually transformed into the business unit of Digital Signature Certifying Authority, Software Development and IT Enabled Services of Mango. This company has recently entered into the retail market with BWA (LTE-4G) services. The VAS of BWA is also becoming a business unit component of CA & ITES. With Mango, I contributed in leading the development of Root Certifying PKI Platform of the Government and subsequently, developed the Enterprise PKI system. Many Turnkey Software projects were also built by my supervision and lead. Web-portals of the Government which is leading towards the Digital Bangladesh have used Mango Cloud Infrastructure as its platform under my supervision.

After that, worked for “Access to Information (A2I)” as National Consultant for roughly 4 years and did my bit on nation building initiative.

I attended many workshops/ seminars at home and abroad, and project Bangladesh very positively both in technology and industrial sectors. During my entire career, I have tried to contribute for the overall betterment of the society, people and the country by bringing in Technology at doorsteps.

In personal life I am married and the proud father of a son and a daughter.