You can remove the packages in Ubuntu by executing the commands:

You have option also to remove the following packages:

After a Debian version has reached EOL (end of life), its repositories go to the Debian archive. Therefore we can use this archive to get packags for our distribution. The syntax for our /etc/apt/sources.list is as follows:

So for Debian Etch, you’d comment out all other repositories in /etc/apt/sources.list and add the following lines: END_OF_DOCUMENT_TOKEN_TO_BE_REPLACED

So, what would be a business on premise server look like…? Tried to build a feature based composition, but I guess need more upgradations-

All suggestions are welcome 🙂

If you want to do a backup in Linux, there are many tools for the job. But if you want the ability to recover from a disaster, as well as back up, only a handful are left. Of those, less than half are able to replace the functionality of Ghost or Acronis TrueImage in a Linux environment, and of those, only one or two (that I know of) can do this without either being ridiculously confusing or requiring a network or backup server.

The winner for me (and my mission critical business computers) is Mondo Archive. With Mondo Archive, you can do all sorts of nifty things, such as back up your windows/linux dual boot and automatically restore them to a completely different computer, restoring to a different disk setup or file system, and more. Here is a simple guide to using it.

Step 1: Install Mondo from Synaptic by first starting Synaptic, entering your root password, and then doing a search for the word "mondo" (without the quotes). Select it for installation. Several dependencies will be added.

Step 2: After you have installed them all, determine whether you will be using hard disk, CD, DVD or something else to back up to. Mondo supports CD-Rs, CD-RWs, DVDs, creating .ISO images on your hard disk, tape drives, CD Streamers and NFS mounts for backing up to. If you have the disk space to spare, and you plan to make CDs or DVDs, I suggest creating .ISO files on your hard disk and then later burning them to whatever media you have chosen later, although Mondo can do direct to device burning, too. I do it this way to make sure the run ends successfully before I overwrite my DVD-RW backup set. The alternative is to have multiple backup sets if you use RW media. Right now, that's not feasible for me. If you do store your images on the hard drive, you will want to have a specific directory set up to hold them. I use /home/myhomedir/backup. You would replace myhomedir with your login name, of course.

Step 3a: Decide how you want to run Mondo. I used to run it in its GUI mode. Note that this is a CLI based GUI. You can do this by invoking the program from a terminal you are logged into as root, like so:

Mondo will then automatically detect as much information as possible, and will walk you through the rest. When it asks you whether your kernel is sane, for PCLinuxOS, the answer is YES. (Of course it is!)

Step 3b: If you need greater control than you can get from the GUI, as I do, you will need to use the CLI and type in a rather long command. Here is the command I use to create full system backups, which I will dissect for you afterwards:

MondoArchive is an excellent backup tool found in Linux. However, the installation process is not obviously clear in debain- it lacks of a simple clue to let you know how to install in the easiest way in debian by using 'apt-get'.

All you need is to add this simple repository to add in your /etc/apt/sources.list file-

There you go… it is installed 🙂

These are the installation instructions that are recommended on Debian. Aegir dependencies (Apache, MySQL, PHP…) are also automatically installed. If you are managing the installation from a remote Windows computer, well-known open source tools for this task are for example PuTTY (a SSH client for command line), and WinSCP (a SFTP client with easy text file editing).

If you wish to install Debian packages over an existing manual install, it's possible. See the Debian upgrade procedures.

Debian packages are uploaded to http://debian.aegirproject.org/ shortly after a release. We eventually want to upload those packages to the official archives, but this will take some adaptation and time to sponsor the packages in.

Use this command to add the Aegir package "Software Source" repository to your system:

To install other versions, see the developer instructions for the debian package.

2. Adding the archive key to your keyring

Use these commands to download and add the repository's PGP key, then update the package list on your system:

This is intended to be an introduction for implementation of stronger authentication and server security focused around the CGI web interface.

There are many ways to enhance the security of your monitoring server and Icinga environment. This should not be taken as the end all approach to security. Instead, think of it as an introduction to some of the techniques you can use to tighten the security of your system. As always, you should do your research and use the best techniques available. Treat your monitoring server as it were the most important server in your network and you shall be rewarded.

Forcing TLS/SSL for all Web Communication . Apache provides TLS/SSL through the mod_ssl module. TLS/SSL provides a secure tunnel between the client and server that prevents eavesdropping and tampering using strong publickey/privatekey cryptography.

Locking Down Apache Using Access Controls . Consider locking down access to the Icinga box to your IP address, IP address range, or IP subnet. If you require access outside your network you could use VPN or SSH Tunnels. This is a easy and strong to limit access to HTTP/HTTPS on your system. END_OF_DOCUMENT_TOKEN_TO_BE_REPLACED

PageFlip4 is a Flash application, written is Actionscript3, and needs Adobe Flash Player 10 installed as a plugin to run it in Your Browser. Adobe Flash CS5 is needed for source-file editing in case of embedding custom fonts, or controlbar icons.

PageFlip4 can be uploaded on any webserver.

Are you looking for a professional solution to manage the content of your book regularly without touching any source files? Update all pages of your book within minutes! PageFlip4 uses external images (or swf files) to fill its pages. Manage all the content and the features just by simply editing an XML file!

cProfiles provides the SafeSquid users, the much needed mechanism of classifying web-sites, in one or more categories. Usage is very simple, yet will allow security managers a lot of room, to handle challenges rather inventively.
Over 3 million web-sites have been classified in a variety of categories like news, webmail, adult, porn, arts, etc. Policy makers can create rules to determine if a web-site belongs to one or more categories, and "ADD PROFILE" of their choice, say – "NOT_BUSINESS", and then use this Profile, in any of the other SafeSquid's sections like URL Filter, or MiMe Filter, or Cookie Filter etc. to allow or deny the transaction, as per enterprise policy.
Categories:

Policy makers can configure cProfiles to "add a profile" to a request for any website that is listed under one or more categories. Whenever a user requests for any website, the cProfiles module verifies if the website is listed under the specified categories. It first checks its cache for an entry. If the entry is found in the cache, cProfiles adds the profile instantly to the request. If the entry is not found in the cache, the cProfiles module sends a query to SafeSquid's Content Categorization Service (CCS). cProfiles uses DNS technology to query the CCS. This naturally updates all the enroute caching Nameservers. So if you even restart SafeSquid, the resolutions will be quickly retrieved from the nearest DNS provider.
Unlike legacy technologies that forces users to store huge databases, cProfiles caches only 'really visited' websites and therefore, utilizes very little system resources. Since the categorization happens in real-time, users do not have to regularly download updates to keep their database up to date.
The CCS has been initially seeded with a little over 3 Million web-sites. CCS has been built with a unique self-learning technology, that allows it to build a list of web-sites that must be categorized for the benefit of it's users, and CCS then automatically creates the "suggested classifications" for these web-sites, in real-time. These results are then validated by human editors, on an hourly basis, allowing the data to be instantly useable by the real-users.
Learn how to use cProfiles with SafeSquid, see – cProfiles Documentation END_OF_DOCUMENT_TOKEN_TO_BE_REPLACED

Together, URLfilterDB and ufdbGuard offer a unique set of features, all aimed at protecting your private network and reducing network bandwidth usage. These features include: 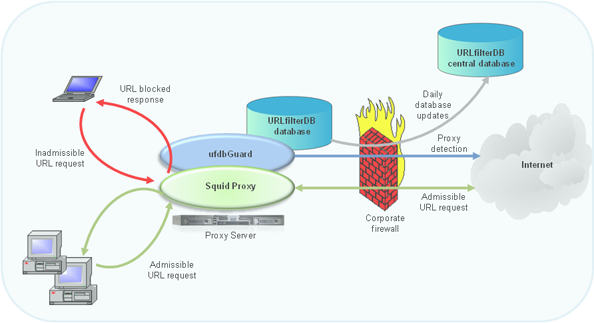 URLfilterDB uses the last method as the fastest and most accurate method for URL filtering available. Navigate to our product comparison page to find out why and how using a blacklist filtering method makes URLfilterDB superior to competitor’s products. END_OF_DOCUMENT_TOKEN_TO_BE_REPLACED