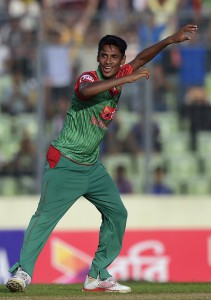 Mustafizur Rahman was the hero in Mirpur again, (off)cutting through India’s batting with a six-wicket haul to add to his five-for on ODI debut, and launching Bangladesh to their first ever bilateral series win against India. Mustafizur’s 6 for 43, the second best figures by a Bangladesh bowler in ODIs, skittled India for 200, before Shakib Al Hasan steered the chase with a busy fifty, his second on the trot.

With this six-wicket win, Bangladesh also cemented their place in the 2017 Champions Trophy. An overjoyed Mashrafe Mortaza, who has been a part of each of Bangladesh’s five victories against India, toasted his team’s “big achievement”.

Why Bangladesh’s target was 200
When the rains came, India were already eight wickets down after 43.5 overs. Because the game was revised to 47 overs per side, India lost out on some batting opportunity, but that loss was minimal as they were already eight down at the time of the interruption. According to the DLS calculations, the batting resources denied to Bangladesh at the start of their innings, compared to what they would have had in a full 50-over innings, was marginally more than the resources India lost out on.