Bangladesh's bowlers held their nerve to atone for the failures of their batsman, as the pluck of the Irish proved insufficient to overcome the most fervent atmosphere of the World Cup so far. In a gripping, low-scoring encounter at Mirpur, Bangladesh flirted with disaster as they squandered a flying start from Tamim Iqbal to crash to 205 all out, and when Ireland reached 93 for 3 at the halfway mark of their reply, they were well on course for a hugely deserved victory. However, six wickets for the Bangladeshi spin quartet set the stage for a flying finish from Shafiul Islam, who claimed 4 for 21 in eight hostile and reverse-swinging overs, to seal a wildly acclaimed victory by 27 runs with five overs to spare. 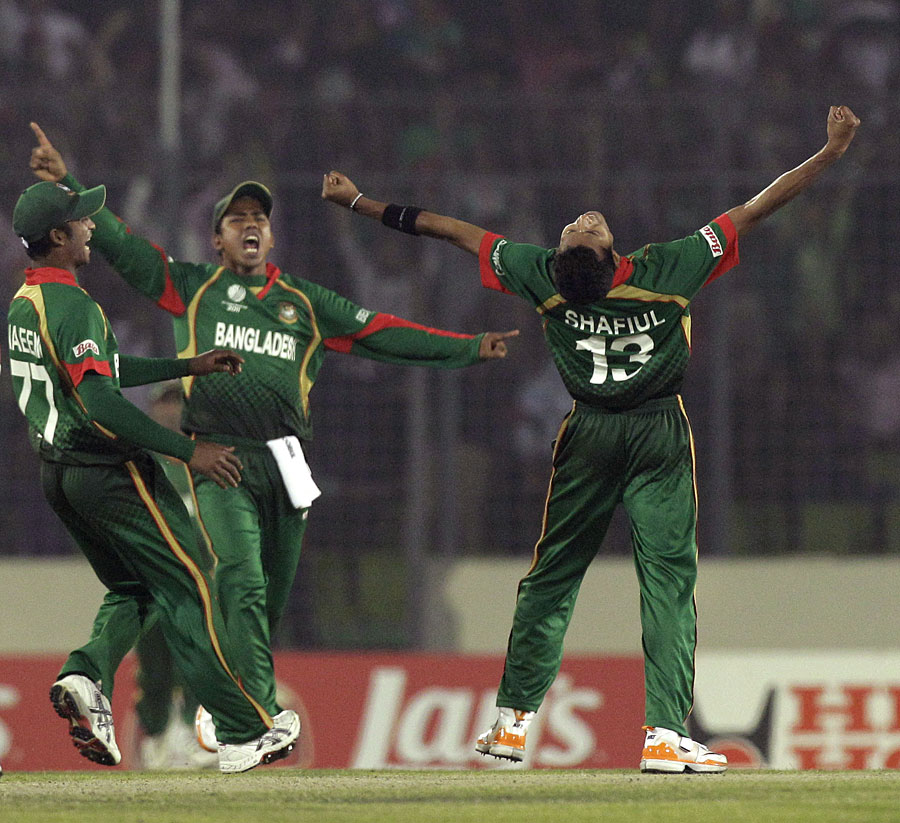 The result was tough on the Irish who, like the Netherlands earlier in the week, gave the match their all and deserved a Test-playing scalp as their reward. But the belief and unity of the Bangladeshis had to be seen to be believed, as they dusted themselves down after a chastising performance with the bat, and set about defending their meagre total with skill, tenacity and some sublime commitment in the field. Mohammad Ashraful, whose mercurial batting once again let him down when the heat was on, proved a revelation with the ball, as his spin-bowling all-sorts picked up two vital wickets inside the first 19 overs, and whose subsequent celebrations imbued both his team-mates – and perhaps more crucially, a rammed and expectant Mirpur crowd – with belief.

There will be many higher-profile fixtures than this in the coming weeks, but few could prove as pivotal to the fortunes of two teams who exceeded expectations four years ago in reaching the Super Eights in the Caribbean. Ireland's hopes of playing in the 2015 tournament hinge on their ability to produce this sort of performance in each of their next five matches, to convince the ICC that they deserve their place at the top table. But more immediately, Bangladesh's victory gives them a real chance of pushing for a quarter-final place that their form in home internationals suggests could be attainable.

After winning the toss and choosing to bat, Bangladesh started the match with the same aplomb with which they finished, bringing their fans to their feet in a thrilling first four overs, in which Tamim's blistering volley of strokeplay lifted the score to an imposing 41 for 0. However, Ireland are a more resourceful side than meets the eye, and the early decision to reduce the pace on the ball slowly but surely changed the tide of the contest. Trent Johnston and John Mooney drew the sting of the innings with their unrelenting line and length, but it was left to the teenaged spinner George Dockrell to inflict the telling blows.

Dockrell twirled straight through his ten overs, claiming 2 for 23 with a performance brimful of guile. His agonisingly slow pace through the air left all the batsmen groping in their defences, scared of taking on the long straight boundary for fear of being beaten in flight, and his two dismissals were carbon-copies of one another – a crease-bound Mushfiqur Rahim paddle-swept to Andrew White at short backward leg to end a doughty innings of 36, before Ashraful followed suit for 1 in the very next over.

Ireland's commitment in the field was unstinting. Ed Joyce and White pulled off a direct-hit run-out apiece, the first to remove Junaid Siddique for 3 – a dismissal which undermined Bangladesh's early momentum following the loss of the opener Imrul Kayes to an expert leg-side stumping from Niall O'Brien – and the latter to extract Raqibul Hasan for 38, at precisely the moment he looked set to guide the tail to a comfortable 200-plus total. But the one telling shortcoming was the performance of their quickest bowler, Boyd Rankin. His nine overs went for 62 – the most expensive analysis of the day – including a poor final over that went for 11.

Pace off the ball was the secret on this deck, at least until such time as the Irish tail was exposed to Shafiul's old-ball wiles. He was given just the one over with the new ball in Ireland's innings, before Shakib turned to the spin pairing of Abdur Razzak and Naeem Islam. The tactic paid dividends in the sixth over of the innings, when Paul Stirling yorked himself while advancing to Razzak, and was stumped by Mushfiqur as the ball dribbled off the pads and past his off stump.

With the pressure intense in spite of the small target, Ireland's captain, Will Porterfield, set himself to make the most of every scoring opportunity. He had launched the innings in confident style with a second-ball drive off Shafiul through point, and he added a second four when Naeem dropped short at the end of his third over. But Shakib, Bangladesh's captain and senior spinner, struck with his first delivery, as Porterfield attempted a flick off the back foot, and instead popped a simple catch to Raqibul at short midwicket.

O'Brien, however, was the right man to enter the fray. He was the hero of a tense run-chase in Jamaica four years ago, when Ireland stunned Pakistan in the 2007 World Cup, and two fours in the same Shakib over were the perfect tonic for his team's frayed nerves. In partnership with the England veteran, Joyce, he picked off the singles and gnawed away at the target, before Joyce, on 16, attempted to drive against the spin, and popped a simple chance to Ashraful.

Ashraful celebrated as if the match was already won, which it self-evidently was not at 75 for 3 in the 19th over. However, the belief in the Bangladesh team was picked up on by the crowd, and the roof was raised six overs later, when White, on 10, played a lazy pushed drive from deep in the crease to be bowled through the gate.

It was a dismissal that increased the Irish jitters ten-fold, but it was nothing compared to the dismissal of O'Brien three overs later. With a rock-solid 38 from 52 balls to his name, he was tempted to put too much bat through a lofted clip into the leg side, and Tamim at deep square leg hurtled in to snaffle a brilliant low catch inches from the turf. At 110 for 5, Bangladesh were right back in the contest and O'Brien's self-recriminations were revealing. With an asking-rate of four an over, there was simply no need for such risks.

His brother Kevin, however, chose his big shots more judiciously – at least at first. An up-and-under six over long-on was the first and only maximum of the match, and he added two more kitchen-sink clumps in Ashraful's ninth and final over, which went for 14. But at 151 for 5 in the 37th over, when all that was required was a cool head and an exchange of singles, O'Brien was suckered by Shafiul's short ball, and launched a pull straight to the substitute, Suhrawadi Shuvo, at square leg.

From that moment on, Ireland's hopes began to evaporate. Naeem nailed Mooney for an eight-ball duck, as he tried a flat-footed cut but edged into his stumps, and three balls later, the obdurate Andre Botha played all round a full-length delivery that crashed into his leg stump. With Shafiul on a roll, surfing the crowd's delirium and zipping the ball at pace from a full length, the tail were unable to resist. Bangladesh's World Cup campaign is up and running. Ireland's, despite their best endeavours, must start all over again against England next week.