In this guide we will go over creating a Proxmox KVM Template from a Cloud Image. This same process will work for any Cloud-Init Openstack based image type you can find online.

Having done a number of these for our Proxmox based VPS service I wanted to post up a guide to help anyone else looking to do the same thing.

My workflow for customizing one of those for use with Proxmox with cloud-init deployment from WHMCS and root login is below. Once you setup one template you can rapidly reinstall new containers and test stuff.

If not installed already installed you will need libguestfs-tools :

To edit the image before importing. We will use virt-edit which is a part of libguestfs-tools.

For the sake of sanity, I highly advise setting your default editor to “nano” because using the default libguestfs-tools editor is a really frustrating experience to learn and will save a lot of wasted time and errors.

You can see your default editor with the the below command.

To set nano as default if it’s not already. use the below command. Please Note: nano should be installed(should be by default on Ubuntu/Debian systems)

Grab the Cloud Image
Grab the cloud image base link for desired OS: Openstack has a nice page on this: https://docs.openstack.org/image-guide/obtain-images.html

These are some direct links:

Ssh into your Proxmox server and fetch the image directly to the server. This saves you having to upload it to the server later. Im grabbing latest Centos 7 for this guide.

Customize Image
We can now use virt-edit to edit the image to enable our desired defaults. The modifications below allows root and password-based logins. Not being able to login to the VPS in novnc without a password is a real pain when trying to fix a network-related issue with the template and it’s locked to key-based.

Here is the format for the command.

So for our example of “CentOS-7-x86_64-GenericCloud-1907.qcow2” to open up the “/etc/cloud/cloud.cfg” so we can modify it to enable root and password logins. The below command will be used. Note it may take a second to open so be patient. 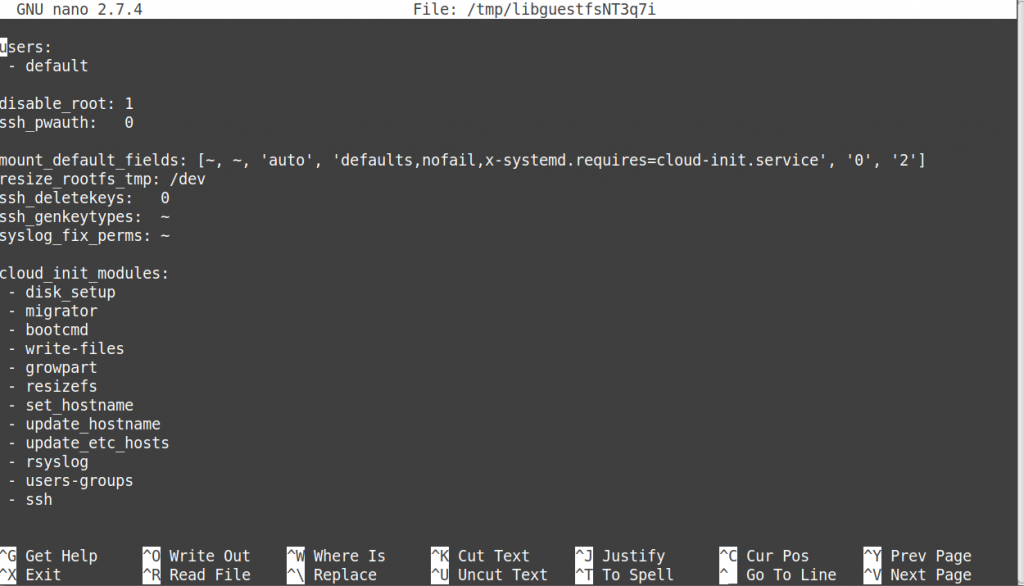 The first thing you want to do is carefully edit the disable_root: 1 to disable_root: 0 This will set cloud-init to not disable this in the /etc/ssh/sshd_config on first boot and allow root based logins. It should look like the below.

Please note some OS cloud images use “true” or “false” where 1=true and 0=false. If they are using true and false vs 1 and 0 please use that formatting.

Next we need to toggle the “lock_passwd” from “true” to “false” Without this you will be unable to use password-based authentication for the account. Scroll down towards the bottom of the file and look for the default user section. See below. 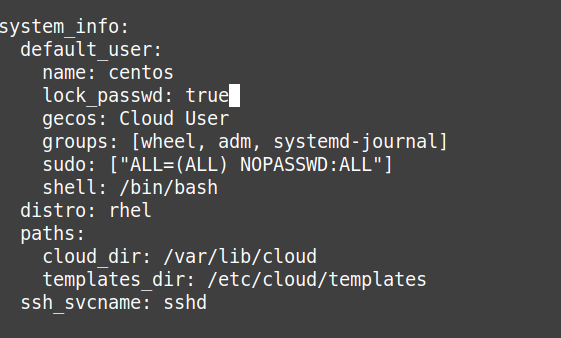 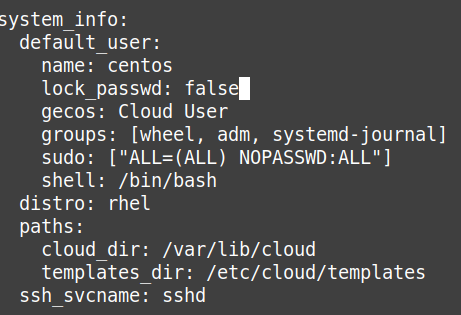 Next part is optional and would go in this same file. I find it handy to splice in the qemu-guest-agent and other stuff I want to be installed right out of the box for the template. The formatting is crucial so make sure you copy it and maintain the yaml formatting that cloud-init config file is based on.

Should look like this. Sometimes I have to put this packages above the ssh_svcname: sshd block for some OS. So if it doesn’t work insert it above that block. See the cloud-init documentation for more details.

Now you can use ctrl+x and hit y to save and exit. 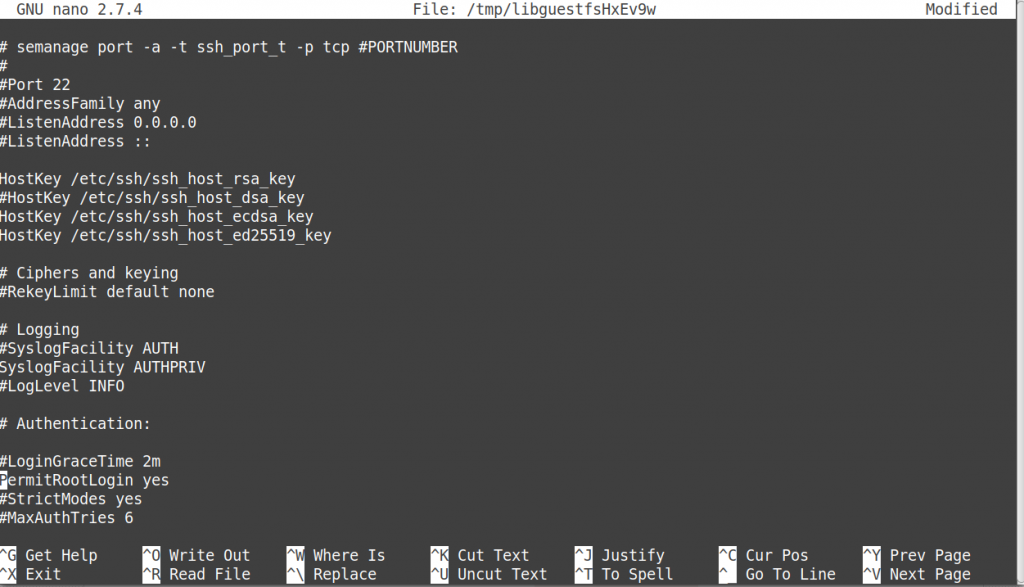 Now we will scroll down and verify that “PasswordAuthentication yes” is set. Sometimes it is sometimes it isn’t so always check. In this template it was enabled. So we can save and close this now if no other customizations are needed. 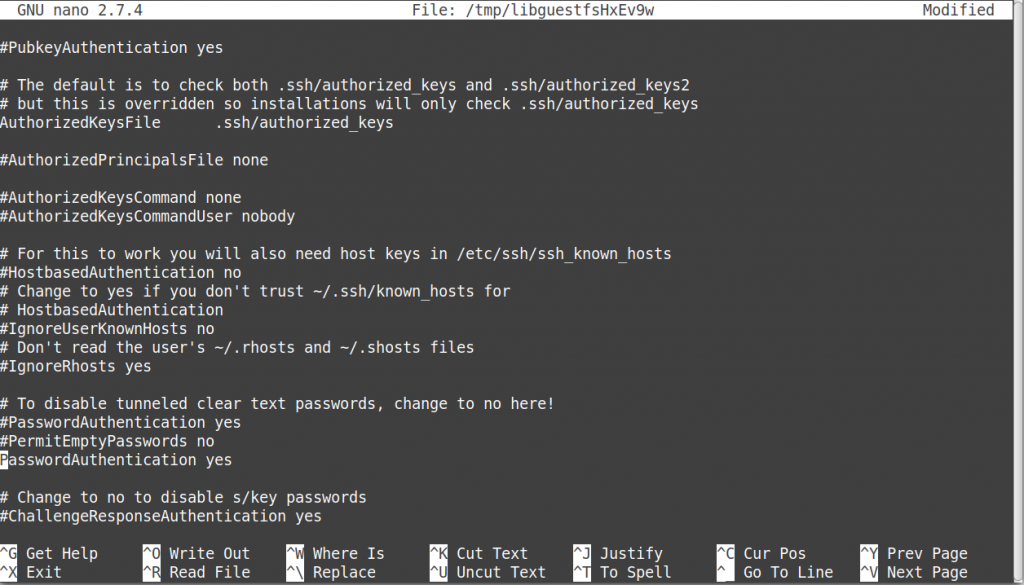 Editing existing images of imported images
Occasionally you will find you got everything except one thing working and you want to modify the image of existing VM. This is totally possible just ensure that the guest VM is completely powered off first.

To edit an already imported disk. This example is based on the vm with id 104. You may need to verify the full path to the disk as the disk image name may vary depending on your environment.

Here we are going to tie it all together.

You may need to create the container if it does not exist already. The below is based on my storage for OS template VM using “local” storage yours may be “zfs” or “local-lvm” etc so may need to update those paths to suit your environment.

Finally attach the new disk to the VM as scsi drive

To be able to boot directly from the Cloud-Init image, set the bootdisk parameter to scsi0, and restrict BIOS to boot from disk only. This will speed up booting, because VM BIOS skips the testing for a bootable CDROM.

Also configure a serial console and use it as a display. Many Cloud-Init images rely on this, as it is an requirement for OpenStack images.

In a last step, it is helpful to convert the VM into a template. From this template you can then quickly create linked clones. The deployment from VM templates is much faster than creating a full clone (copy).

Create a clone from the previous template.

Conclusion
I hope you found this tutorial helpful in creating a Proxmox cloud-init KVM template. There is so much more you can do with cloud-init and libguestfs-tools like injecting apps and repos in the image before its even booted. We recommend making backups before major edits so you can revert back to the base image if there is an issue.